This week my special guest on The JazzBites Show was recently voted BEST NEW JAZZ ARTIST in Hot House Magazine, New York, and has been featured in the The Washington Post, Boston Globe, San Francisco Examiner, The Village Voice, as well as high-profile media right across the United States: his albums are played on radio stations all over the world. A multi-talented musician, innovative composer, and bandleader based in New York, Daniel plays the saxophone in all its flavors, plus the oboe, and clarinet to name but a few, and his distinctive sound has been described as eclectic, energetic, and inspired. Today we discuss his hectic touring schedule that provides the group with around 200 gigs per year, his ongoing scary adventure into improvised musical theatre on Broadway in the heart of NYC, and his outspoken and controversial opinion on why we should all let go of the past gracefully, stop whining about longstanding Jazz clubs closing, and embrace the increasing number of new venues springing up all over New York. 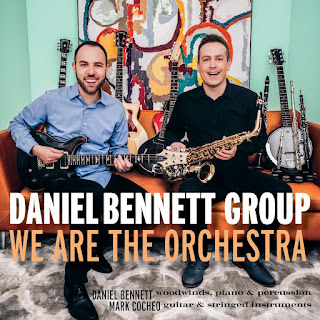 WE ARE THE ORCHESTRA is the brand new album by the Daniel Bennett Group and it's available to buy hot from the press directly from the website at danielbennettgroup.com

You can read and listen to Podcasts, News, & Reviews about Daniel and the Group Here

View videos of here of the Group at the Blue Note NY, Rochester NY & More


Posted by ANTHEA REDMOND AKA @Jazzigator at 1:24 PM